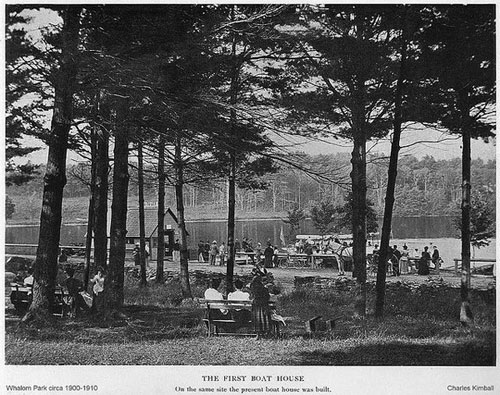 Evolution of Amusement Parks In America

If you look at park history, you will realize that Lunenburg’s Whalom Park is a ‘classic amusement park’ that followed the emerging trends in America from the very beginning. It remained this way from the birth of picnic parks up through various additions and sophistications of the times and lasted right up through the Disney era, when all the rules suddenly changed.

“THE FIRST BOAT HOUSE – On the same site the present boat house was built.”

From a rare book by the Fitchburg & Leominster Street Railway Co. entitled “Whalom Lake and Park” circa 1910. Donated by Charles Kimball.

The Midways and Coney Island

Following the American Civil War in the late 1800’s, increased urbanization gave rise to electric traction (trolley) companies. In Whalom’s case, it was the ‘Fitchburg and Leominster Street Railway Company’. At that time, utility companies charged the trolley company a flat fee for the use of their electricity. As a result, the transportation companies looked for a way to stimulate weekend ridership. This resulted in the amusement park. Typically built at the end of the trolley line, amusement parks initially were simple operations consisting of picnic facilities, dance halls, restaurants, games, gardens and a few amusement rides often located on the shores of a lake or river. These parks were immediately successful and soon opened across America. [2]

– Whalom was at the end of the electric trolley line beginning in 1893. From a rare book by the Fitchburg & Leominster Street Railway Co. entitled “Whalom Lake and Park” circa 1910. Donated by Charles Kimball 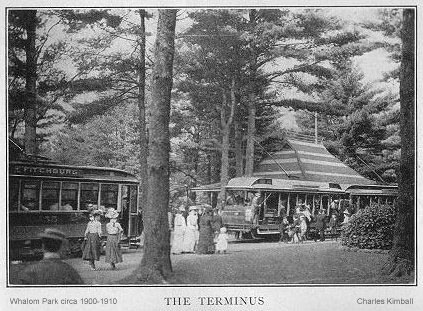 The Midways and Coney Island

The amusement park entered its golden era with the 1893 World’s Colombian Exposition in Chicago. This World’s Fair introduced the Ferris Wheel and the amusement midway to the world. The midway, with its wide array of rides and concessions, was a huge success and dictated amusement park design for the next sixty years. The following year, Capt. Paul Boynton borrowed the midway concept and opened the world’s first modern amusement park – Paul Boyton’s Water Chutes on Chicago’s South side.

Unlike the primitive trolley parks, the Water Chutes was the first amusement park to charge admission and use rides as its main draw rather than picnic facilities or a lake. The success of his Chicago park inspired him to open a similar facility at the fledgling Coney Island resort in New York in 1895.[2]

The amusement park industry grew tremendously over the next three decades. The center of the industry was Coney Island in New York, which at its peak was home to three of America’s most elaborate amusement parks along with dozens of smaller attractions. Around the world, hundreds of new amusement parks opened, while many early trolley parks expanded by adding new rides and attractions. New innovations provided greater and more intense thrills to the growing crowds. By 1919, over 1,500 amusement parks were in operation in the United States alone.

The Depression and World War II

Unfortunately, this development did not last for long [2]. In 1929, America entered the economic depression, and by 1935 only 400 amusement parks remained; many struggling to survive. World War II further hurt the industry, when many parks closed, and others refrained from adding new attractions due to rationing.

With the end of World War II, America and the amusement park industry enjoyed post war prosperity. Attendance and revenues grew to new records as new parks opened across America.

As a result of the post-war baby boom a new concept, the Kiddie land, took advantage of the a new focus on family. The Scaled rides introduced a new generation to the joys of the amusement park in the rapidly growing suburbs. Unfortunately, this resurgence was short lived.[2] As the 1950’s dawned, television, urban decay, segregation, and suburban growth began to take a heavy toll on the aging urban amusement park. The industry was again in distress as the public turned elsewhere for entertainment. What was needed was a new concept and that new concept was Disneyland. 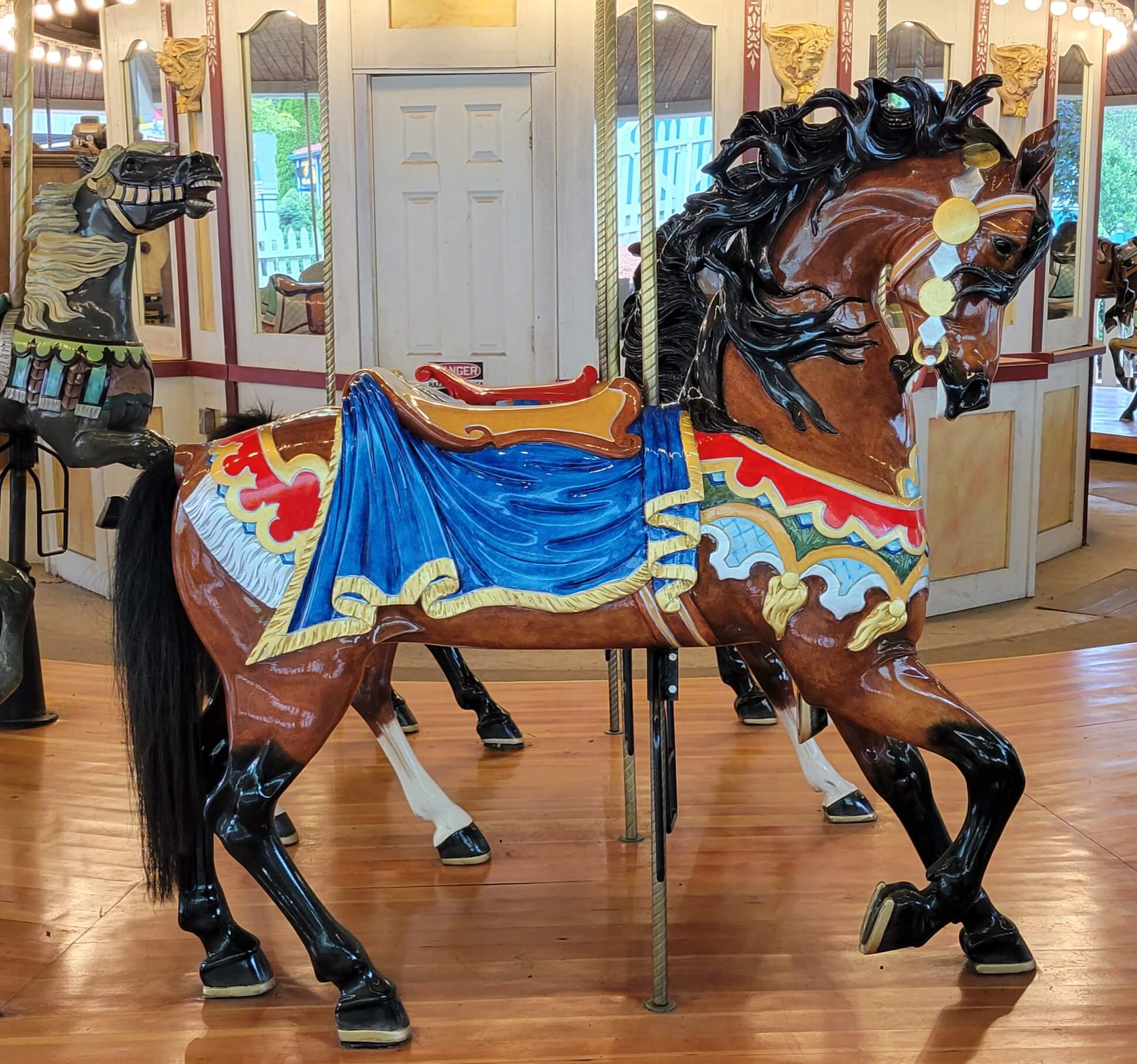 The U.S. theme park industry was diversifying into new smaller-scale targeted products for “niche” markets which might not be covered by the large-scale theme parks. Some feel that the trend was driven by market opportunities like those which drove expansion of the theme park industry several decades ago. The theme park development boom in the 1970s represented a massive, heavily capitalized response to the need to provide baby boomers with family entertainment. Theme parks fit into the urban fabric of America by being located next to large, built-in metropolitan markets, and on relatively inexpensive land.

The 80s witnessed a narrowing of market and product focus with the smaller investment waterparks. This was the first major diversification of the industry. Waterparks appealed to a narrower market, usually teens and young families, and were suitable for smaller secondary markets.

The new entertainment attractions of the 90s represented a furthering diversification. These attractions narrowed the niche appeal even more with smaller capital investment and an appeal to very specific market groups such as children, teens, young singles, etc. Many of these attractions began to tap the “baby boomlet” and responded to the need to regenerate under-performing suburban real estate properties by locating in shopping centers.