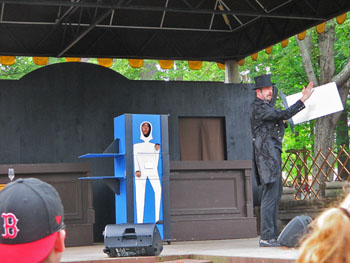 Hagerman’s Vaudeville Magic show has been at the park for a few years now. I saw the show for the first time in early 2014. I only saw the last half but at that time I was not very impressed. This opinion made it into my Summer Shows report for 2014. I was invited back for a review and the show’s Performer David Hagerman was nice enough to send me a ticket so I could see the show again. This time I was much more satisfied with what I saw.

The show pulled a good crowd ahead of the show’s start time. This is the only show taking place at Canobie’s Village Stage. While my criticism may have been harsh the show seemed to take what I had talked about to heart. During this second watch the pacing of the show was much better. The acts seemed to flow more smoothly and were done slow enough to follow the trick but fast enough that you didn’t lose interest. What I was happiest to discover was the addition of music. Music does so much to create a mood and this made things much more exciting. The changes elevated the show for me. It no longer felt like a magician at a party but a full blown show.

David’s best talents are his Mentalism which he demonstrated in a few tricks. While I didn’t see it in this show, I have seen him in commercials demonstrating sleight of hand. He’s very good in that area as well. I hope to see more of it in the show. The biggest surprise of the show was the Finale. The quick change was a bit flat on my first visit but now later in the season it was not only perfected but one upped.

The Hagerman Vaudeville Magic Show is back for the 2015 season I will be making a point to see this year’s version. I have also heard he will be returning in 2016. So if you’re at Canobie Lake Park make a point to work this show into your daily plans.