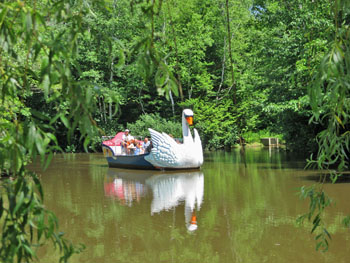 Since I was in the area and snagged a discounted season pass I drove the extra hour to the park and processed the pass. I had only been to the park once in the last few years but this year the park installed a new wood coaster, Roar-o-Saurus. This was a Thursday so I expected light crowds but I arrived to a full parking lot. Despite this, the crowds were a bit moderate within the park itself and most rides were either walk-ons or only a cycle or so wait. The mid week busyness may have had something to do with the fact that Curious George was making an appearance that day.

Season pass processing was simple but I was surprised to see they now process passes at customer service. A few years ago I had a pass and they processed it at the driver’s license building by the Antique Cars ride. The equipment there is much better. At costumer service they have low quality printers and take your picture with a webcam.

Ride count: Roar-o-saurus X10, Polar Coaster X3, and one ride on the fallowing; Splash Battle, Cuckoo-Clockinspeil, Alice’s Tea Cups, Las Brovas Silver Mine (Walkthrough), Bamboo shoots, Turtle Twirl, Train. I also spent time in the Story book forest and Cinderella’s Court. There were no rides down for the day but the Dutch Shoe ride did see some down time.I wanted to ride Dr Geyser’s Remarkable Raft Ride but I would have had to pay for a locker to hold my back pack. $1 dollar, not worh it.

Given this trip was an add-on I only had about 4 hours in the park. My focus was to check out the wood coaster and attempted to ride it in as many seats as possible to get a good idea of the coaster. I did not eat at the park. I found food options on the high end with most options at 9.99 with a few Kids sized meals at 6.99. I checked out a few locations and found similarly high prices or had a difficulty finding the prices on those items. I ended up only buying a Souvenir cup since the one I had was no longer accepted, but I was told this new cup will give me refills for the season. The cup was 9.99. 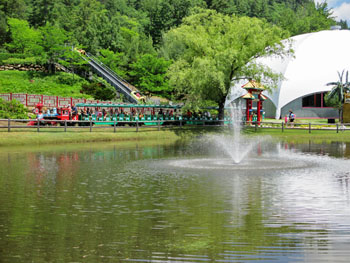 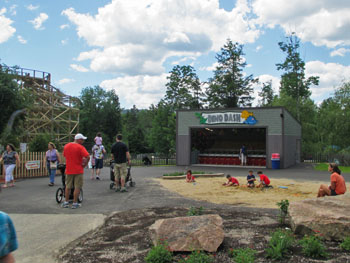 For the most part only a few changes were made to the area. The preexisting bathrooms saw no change to support the theme. A large planter in the center of the courtyard was removed and in its place is a small dino dig. There is only one dinosaur to dig up and there is a sign that names the dinosaur and explains the parts of the skeleton. I was expecting something a little bigger but the small attraction did catch the attention of a few kids.

There is a roller ball game added to the area called Dino Dash. The mechanism was relocated from the Las Bravos area and rehabbed to fit the theme. The game looks great but the building housing it is pretty average. The game did seem to be doing well in its new location but then it never did bad in its original location. The only other building added is a booth for the on ride photo. There is no gift shop or stand in this section with Roar merchandise.

The biggest attraction next to the coaster is the Dinosaur displays. The park purchased both static and animatronics Dinosaurs that are placed around the area. They are a nice touch but I was a bit disappointed. At the construction tour they talked about ordering a number of figures. At the park on my visit was about a half dozen dinos featuring 4 different species. They are all located around the bridge leading to the coaster.

The coaster is a bit of a mixed bag. This is similar in scale then Wooden Warrior at Quassy in CT. Roar is much more compact and includes some fairly extreme angles as well as very fast transitions. At construction and on paper these would seem to add a lot of intensity. It does, but at a cost of smoothness. The coaster has a noticeable shimmy throughout. A few MPH less might stop this. I would not be surprised to see a trim added in the near future. The coaster also has a very steep drop which is borderline too intense for some of their audience. 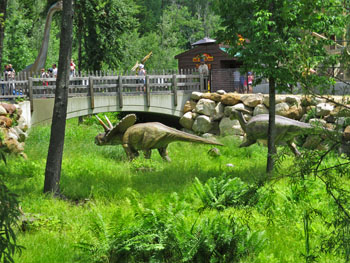 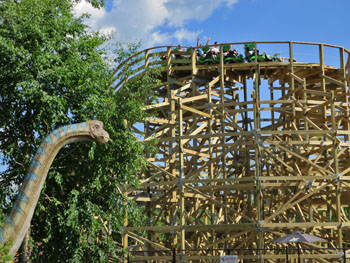 In all it’s a very good addition and has a lot to offer. The Timberliners are very accommodating and provide a comfortable ride. I would note that while I enjoyed it I saw many kids scared off pre ride do to noise and it scared my niece to death who normally loves coasters and rides. I did see far more coming off of the ride happy but there may be a healthy medium that was missed on this addition.

I spent a good deal of time n the Los Brazos area. The area added a panning for gems attraction which was relocated from Lake Compounce. The attraction looks great in the center of the area. The park added a small booth to support it that is noticeably newer then the res t of the area. The park walled off the former game building, hopefully this spot will see an addition soon. I also noticed they redid the Shooting Gallery. The park removed the cool cameras and converted to a more traditional rifle theme. Interesting though is the park used over the counter air rifles and retrofitted them with the laser mechanism. The price has been increased and is now $1.00 for 24 shots.

The areas star attraction is the Silver Mine. This guided tour is a spin on the crooked house attraction. I seem to always catch this attraction towards the end of the day and normally by myself. It was very different with a group. Best of all there were adults and kids that have never done the attraction before so it was a joy watching them go through the attraction with a level of ahh. Seeing the group get so excited about a bottomless pit, the vortex and the bottle rolling up the table made for a very good experience.

I wandered the park taking in rides, the landscaping, and watching guests interact with the fairytale animals and themed areas. The day did not feel rushed, which was a blessing given the crowds I expected. I stayed till closing, took the last after hours train around to the front, and made my way out. Because I left right at closing I hit a lot of traffic but I knew the park so I was able to cut behind a building and get into the road without waiting in a long line. I left right away so that I could stop by Attitash for the mountain coaster. That mini report will be up soon. 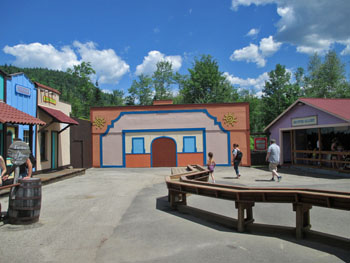